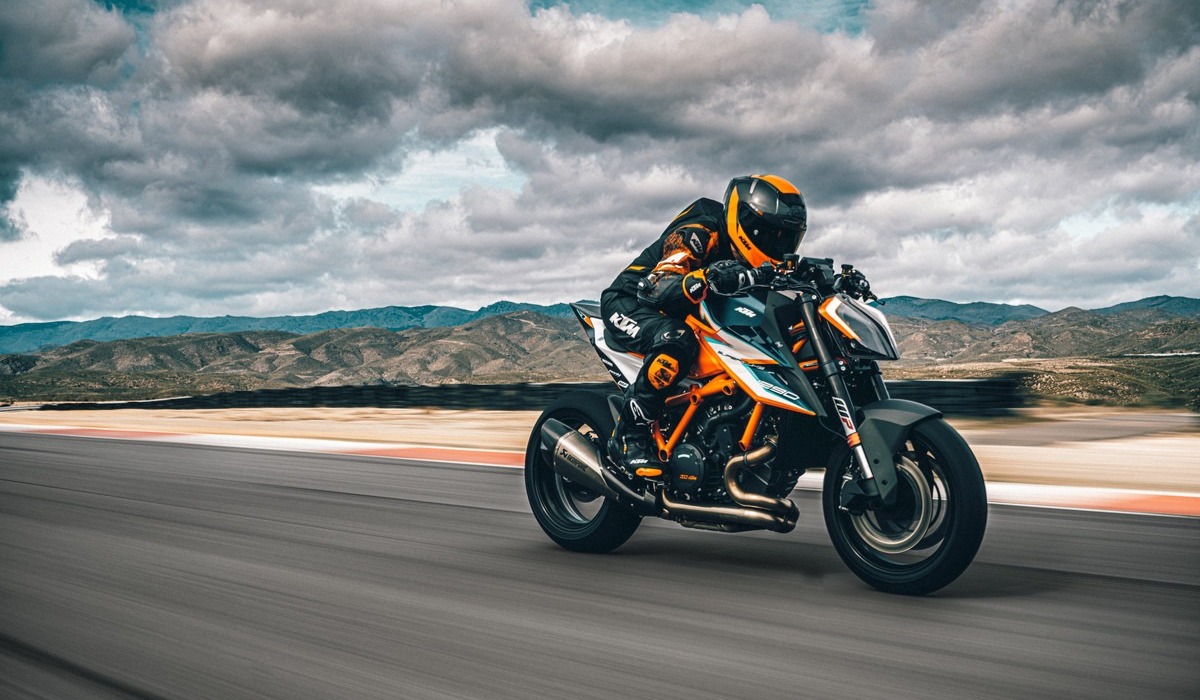 KTM continues to surprise, taking the ever-popular KTM 1290 SUPER DUKE R platform and forging an even angrier BEAST. Being the first machine menacing enough to wear an ‘RR’ badge, it sits proudly at the top of KTM’s street range as a limited-edition flagship motorcycle, developed around one key statement: Pure Performance.

Based on the latest KTM 1290 SUPER DUKE R prototype, the limited production RR is a demonstration of what happens when your R&D department is allowed free reign. It’s a true definition of READY TO RACE, with added exclusivity, exotic componentry, and premium workmanship.

The figures tell the story – 1,301 cc, 180 hp, 180 kg, and 140 Nm, translating into a power-to-weight ratio of 1:1, with enough torque to tear open the bitumen. Make no mistake, this BEAST is all about track-ripping performance. It is a no-compromise Hyper Naked motorcycle that has been conjured up from the darkest depths of the performance lab to decimate lap records.

Weighing in at a whole 9 kg lighter, the RR is more agile, stiffer, and offers better high-speed stability than the standard KTM 1290 SUPER DUKE R. The wheels too have gone under the knife, shedding a massive 1.5 kilograms of unsprung weight. These are wrapped in ultra-sticky Michelin Power Cup2 tires, dramatically upping the track readiness of the KTM 1290 SUPER DUKE RR.

Carbon fibre has been used extensively in the KTM 1290 SUPER DUKE RR’s construction, with the subframe also receiving the lightweight carbon treatment. This has allowed designers to reimagine the tail of the BEAST, creating a unique single-seat unit, with redesigned LED taillights incorporated into new LED turn signals. These also include KTM’s adaptive brake light as standard.

All of this, not to mention the biggest Euro5-compliant V-Twin engine currently available in a Hyper Naked motorcycle, makes the KTM 1290 SUPER DUKE RR the ultimate backstreet weapon or track day tormentor.

It gets its power down to the ground thanks to a new quick-turn throttle twist grip, with a 65-degree opening angle – a 7-degree reduction over the standard KTM 1290 SUPER DUKE R’s 72-degree grip. This was developed to deliver improved throttle response, but also to reduce the rider’s wrist angle and elbow drop at full opening.

As with all extreme track terrors, this BEAST would not be complete without a lightweight Akrapovic Slip On exhaust system. Made from titanium with a carbon fibre end cap, it provides the ‘bark’ to the BEAST’s bite. For the absolute power-hungry, the Akrapovic Evolution Line full system is available as an optional extra.

The KTM 1290 SUPER DUKE RR isn’t only impressive when it comes to hardware. Under its carbon-scaled skin hides the most complete track-orientated electronics package ever seen on a KTM – and all as standard.

Most notable of all in this package are the advanced Track and all-new Performance modes, which allow riders near-unlimited adjustability options for rear-wheel slip, throttle response, Launch Control, and Motor Slip Regulation.

While the KTM 1290 SUPER DUKE RR already boasts a full range of never before seen components and bodywork, a full range of KTM PowerParts has also been developed for those riders looking to boost its already frightening performance and track-ready viciousness.

And let’s not forget, riders of the ultimate Naked motorcycle need to not only perform, but also look the part. For that reason, a dedicated range of KTM PowerWear has been developed to give KTM 1290 SUPER DUKE RR riders the utmost confidence when at the absolute ragged edge.